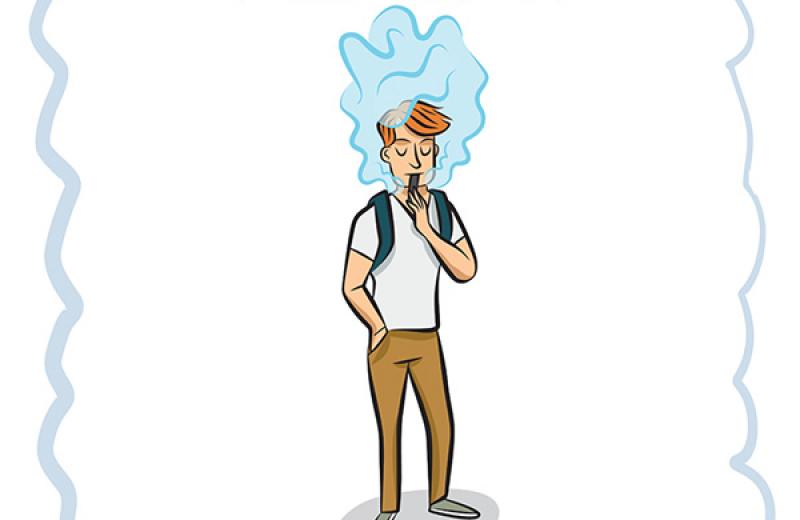 In 2018, 21% of all BC students reported that they vaped with nicotine.

It’s true that with vaping, you’re not breathing in tar and other components of smoke the way you would with a cigarette, but research shows it’s still risky for your health: you’re inhaling particulate matter, nicotine, heavy metals such as lead, and other cancer-causing toxic chemicals.

“There's metals found in vaping that are being inhaled into people’s lungs, and there’s nicotine, which puts people at risk of addiction," says Lindsay Willoner, Northern Health’s Regional Nursing Lead, Tobacco Reduction. “Vaping has only been on the market in Canada for about a decade, so we don't know the long-term effects on public health."

Lighting a traditional cigarette makes tobacco burn, releasing smoke that contains nicotine. The smoker breathes it in, delivering nicotine to their lungs.

With vaping, there’s no burning. Instead, the vaping device heats a liquid and converts it to a vapor that the user inhales. This vapour is often flavoured and can contain nicotine.

"Because it looks like it's smokeless and might not give off any odour, people may think there's really no harm with it,” says Willoner. “But really, the e-juice or vape may have addictive substances in it, so it doesn't come without harm."

Vaping can harm your health

Long-term effects can include lung disease, heart disease, and some types of cancer. Also, children and adults have been poisoned by swallowing the e-juice or absorbing it through their skin.

There’s also “popcorn lung,” caused by the buttery flavouring found in some vaping products — it can cause bronchiolitis obliterans, a serious and irreversible lung disease.

Vaping is illegal for those under 19

With vaping on the rise among youth, there’s the risk of a new generation becoming addicted to nicotine. Cannabis can also be vaped with an undetectable smell.

You might be able to get financial help to buy smoking cessation medications.