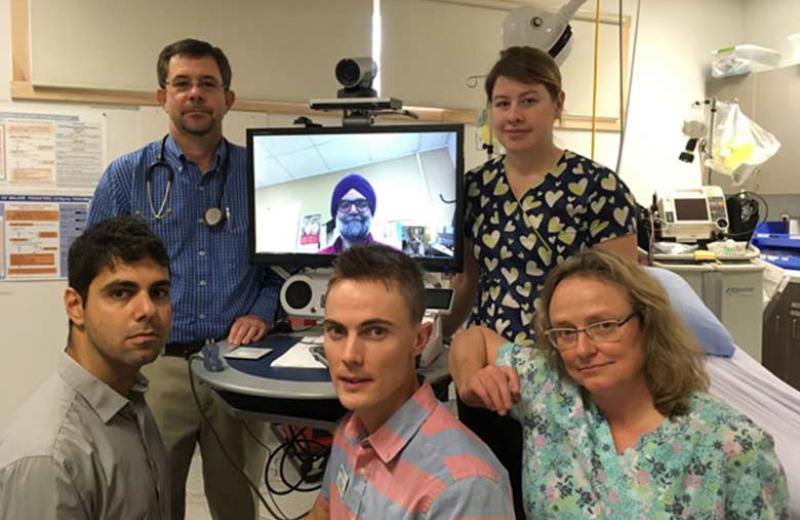 Dr. Ray Markham, a general practitioner based in Valemount, BC, and Chief of Staff for Robson Valley, is one of the physicians spearheading the Robson Valley Virtual Medicine project. He says the “virtual care approach” works like this:

“Virtual support of clinicians providing emergency care in the Robson Valley has resulted in a number of patients not having to travel for their care,” says Markham. “And it’s improved the confidence and comfort of nurses and physicians in low volume settings. You realize you’re not alone – someone else has their eyes on the patient and can be supportive.”

Valemount and McBride are served by a total of five physicians, but on weekends or after hours, only one nurse and one physician provide emergency services to clinics in both areas. That means some patients may have to travel 90 kilometres between McBride and Valemount to actually see the on-call physician. In addition, some patients may have to be transferred to Prince George for care, over 200 kilometres away. Depending on the season, that means ambulance crews can run into inclement winter road conditions like snow and ice, or wildlife on highways. Remote locations also mean that ambulance crews are often out of cell phone range.

Markham credits Dr. John Pawlovich as the person who initially saw the need for virtual emergency health care support in northern rural areas. As the video lead for the Rural Coordination Centre of BC, Pawlovich has been providing telehealth support to First Nations communities for several years, working with the Carrier Sekani Family Services (CSFS) group across northern BC.

Following Pawlovich’s lead, the Robson Valley Virtual Medicine initiative began as a pilot project in November 2016, led by Northern Health and the Northern Interior Rural Division of Family Practice (NIRD). Over the ensuing 18 months, the telehealth approach was used and evaluated in 26 consultations. An evaluation report of the pilot, conducted by the UBC Digital Emergency Medicine Evaluation Team, was released in April 2018. Its findings showed that virtual care improves rural patient care and safety, reduces patient transfer costs, and builds relationships between rural and emergency physicians. Another benefit? It reduces stress for rural physicians, especially in acute situations.

“The more hands involved, the better,” says a patient interviewed for the evaluation report. “The experts were right there on hand. It gives great assurance for the patient that they were in good care with two doctors on hand and two doctors on video.”

Dr. Stefan Du Toit, who co-led the initial testing and use of the Robson Valley virtual medicine system, is also based in Valemount, but also handles emergency calls from McBride. He says with rural doctors consulting with emergency physicians using hand-held cameras or videoconferencing stations, the physicians acquire information directly, then decide if a patient needs to be sutured, for example, or undergo a more complex procedure.

Du Toit says during the pilot, for example, Robson Valley physicians had to do three electrical cardioversions in one week. In that procedure, atrial fibrillation is corrected with an electrical impulse to the heart which resets the heart’s rhythm. Thanks to support from Prince George emergency physicians, the procedures were done locally with no complications, and patients did not have to be transferred to Prince George.

“We usually get trained as students to deal with these types of cases but very few of us have to deal with them commonly as physicians,” says Du Toit. “And when you have someone who can guide you through the case, it helps with education and teaching.”

Adds Du Toit: “Where virtual care helps me significantly is when we’re on call on the weekend – just a doctor and a nurse. We have to keep our hands on the patient. So, if you have a video call linked, you can keep your hands on the patient, and have a conversation in the room. It’s that extra support that you need sometimes. Patients and physicians benefit.”

With the pilot project completed, there is still work to do to ensure the virtual medicine project continues to thrive. Among some of the recommendations made by the evaluation team:

Telemedicine in the North

The pilot project’s success has also resulted in NIRD receiving further funding from the General Practice Services Committee (GPSC) to advance the virtual care work. The GPSC is a partnership of the Government of BC and Doctors of BC.

“It’s evolving all the time and other pieces are being added on to it. For example, a link can be sent to a patient to access videoconferencing by phone, laptop, iPhone or Android device, which enables clinicians to do virtual home visits not only with local patients, but also those in outlying areas,” says Markham.

He adds that communities including Vanderhoof, Fraser Lake, Mackenzie, Burns Lake, and Quesnel have all expressed interest in the virtual medicine project, noting that CSFS communities such as Takla Landing and Tachet have been leading remote telehealth work for years. Du Toit is the co-lead, through NIRD, to get videoconferencing up and running across the north.

Collaboration has been key to the implementation and success of the pilot project. In addition to co-leads Northern Health and the Northern Interior Rural Division of Family Practice (NIRD), other collaborators involved with the Robson Valley Virtual Medicine project are local physicians, several specialists, and the following organizations: