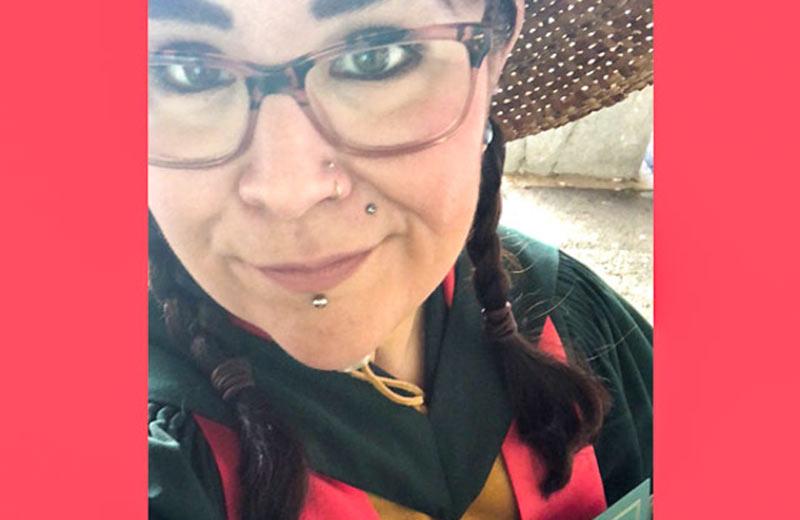 Jessie on convocation day, wearing the robes of a Ph.D. and a traditional cedar hat.

In December 2018, we featured a story on Prince George resident and Northern Health staff member Jessie King presenting her Ph.D. thesis at an international conference in Ontario. Jessie has now successfully defended that thesis, gaining her doctorate in Health Sciences from the University of Northern British Columbia (UNBC).

“When my supervisor told me my thesis defense was successful, I just started crying and shaking because it’s been eight years,” says Jessie. “It was such a personal process.”

Jessie was also awarded the Pounamu Taonga Award, which recognizes an Aboriginal student who is graduating from UNBC for their academic achievements, university service, and community involvement.

The first part of the title is Sm’algyax (a dialect of the Tsimshian language) for “This is who I am.” She chose this title to acknowledge the intensive 10-year exploration of her identity and to honour her maternal ties to Gitxaala and the Tsimshian Nation.

Some of the questions that her thesis examined include:

“I had such a fantastic supervisory committee," says Jessie, who hopes to publish her dissertation.

Her next adventure will include post-doctoral activities and teaching a course on research methods and design for the First Nations Studies department of UNBC.

"It will be nice to get my foot back in the teaching door," she says.

For now, she’s enjoying plenty of well-deserved quality time with her family.

Congratulations to Jessie on her many achievements!