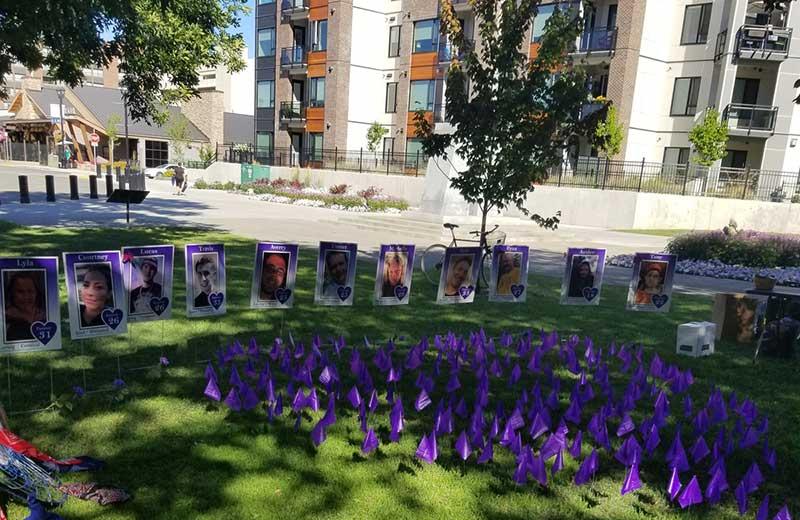 A sombre memorial to those people who have been lost to overdose was created on the grounds of Prince George City Hall for IOAD 2022.

In the first six months of 2022, the number of lives lost to toxic drugs in BC was the highest ever recorded in that timeframe. According to the Government of BC website, “illicit drug toxicity is the leading cause of unnatural death in British Columbia and is second only to cancers in terms of years of life lost.”

August 31 is International Overdose Awareness Day (IOAD). Events to recognize IOAD took place across the province, country, and world. More information about some of those events can be found on the International Overdose Awareness Day website. On the afternoon of August 31, I had the opportunity to attend the IOAD event at City Hall in Prince George. There were dozens of people connecting with each other, visiting tables, and standing quietly by the memorial front and centre at the event, showing names and faces of people lost to overdose.

Circling this memorial, on the front lawn of City Hall, were tables for support partners and community programs. People at these tables were offering food (Moms Stop the Harm had bags of food and supplies, and had ordered pizza to share with people attending), naloxone training, and testing for sexually transmitted and blood borne infections. Most importantly, people attending this event were offering support and conversation. This was a place of true community where lives and love were recognized.

Local and regional support services attending the event included (but were not limited to):

I had the honour and privilege of connecting with people who generously shared their stories and the stories of people they love and lost. Each person I spoke with agreed that the most important parts of this event was to honour and remember those who have lost their lives to overdose, and to raise awareness of overdose and reduce stigma surrounding people who use substances.

"Stigma against people who use drugs results in discrimination, impacts health, and contributes to overdoses” (Northern Health Stop Stigma, Save Lives). By sharing stories of people who use/used substances, we can build compassion and empathy, and a community that will support people, and treat them with dignity and respect. The work of stopping stigma includes listening to people without judgment, and seeing them for the people they are, not the substances they consume or lives they live.

It was important for me to be able to stop by the IOAD event and I am very thankful to the people there for their time and dedication. Thank you for connecting with me, and for sharing your stories.