Our People: Viva Swanson champions the “land of opportunity” 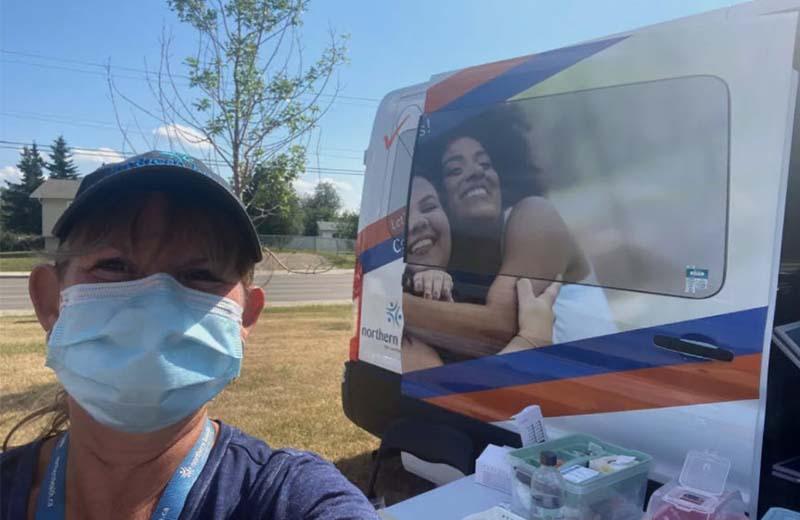 Viva takes a selfie with the vax van. The purpose of the vax van was to take a new approach to targeting underserved demographics for COVID-19 vaccinations.

Nurse Viva Swanson is Northern Health’s northeast leadership development advisor and has called Fort St. John (“the Energetic City”) her home for the past 27 years.

What brought you to Fort St. John?

“I moved here because of a blind date!” says Viva.

Originally from Prince George, she lived in Smithers at the time.

“I went on a blind date with my now-husband, who lived in Fort St. John,” she explains. “We eventually married and had three kids. I’ve been in Fort St. John ever since!”

Coincidently, Viva also had family in the area and a familiarity with the city.

“Even though I really did move here because of the blind date,” she says, “I had no fears relocating, because I had been here as a student, and I also had my auntie who was a maternity nurse here at the hospital for 30 years.”

One of the things that Viva loves most about living in Fort St. John is how connected the community is.

“I started my career in Fort St. John as a maternity nurse and worked in the role for many years,” she says. “I was able to really get integrated into the community because I got to meet so many brand-new mommies and daddies, and their siblings, parents, aunties, and uncles. We’re still small-town enough that you’re seeing so many familiar faces when you’re out getting groceries or at a sporting event.”

With a population of just over 20,000, Fort St. John is the type of community where you get to experience small-town life without missing out on any of the amenities you might find in a larger community.

“We’ve got so much to do here – lots of sporting events and lots of culture – but you can still get across town in 10 minutes,” says Viva.

What are some innovative projects or interesting work you’ve been involved with throughout your career?

The first project that comes to mind for Viva is the mobile vaccination van, commonly referred to as the “Vax Van.”

“I’ve had so much fun with this project,” she says. “It has taken me out of my office administrative role and given me the opportunity to interface with the public again.”

The Vax Van is a new approach to bringing COVID-19 vaccinations to hard-to-reach communities. As well as being part of the small team who staffed the van, Viva was one of the people who initially advocated for it.

“The beauty of this project is that when the idea was put forward, I just kind of ran with it and had immediate support from both senior leadership and executive at Northern Health,” she says.

The Vax Van was fully operational by July 6, 2021 – just ten days after Viva and her team came up with the initial idea.

One of the places it set up at was at a pullout on Inga Lake on the Alaska Highway near Fort St. John, with the goal of reaching oil patch workers. Viva notes that many workers are often hesitant to get the vaccine, not because they don’t believe in it, but because they’re worried about experiencing potential side effects like tiredness and muscle aches while working long shifts.

The Vax Van set up at different points along the Alaska Highway a total of three times and each time between 20-30 oil and gas workers were successfully immunized against COVID! It was convenient for the workers to have access to the Vax Van so close to their work sites.

What would you say to someone who was thinking about working in Fort St. John?

Many people may assume that the city’s distance from bigger centres will be a problem, but for Viva, this couldn’t be further from the truth.

“This is the land of opportunity! If you take a look at my resume, living here has provided me so many chances to do all kinds of things without ever leaving the area,” she says.

For someone thinking about moving up here, Viva has this advice: “Don’t even think twice! Just jump in, jump on, and say, ‘Whee!’ I have never regretted the decision to come up here. I love it!”

Hooray, Viva! You were and are SUCH an inspiration. Even in high school, you were one to give whole-heartedly to the project at hand. Congratulations, Dear One. 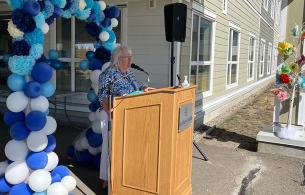 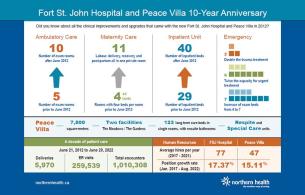 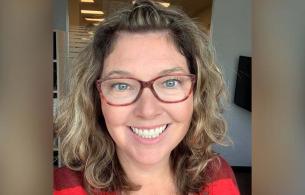 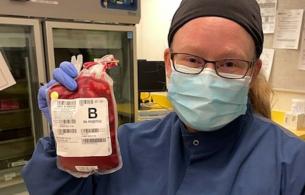