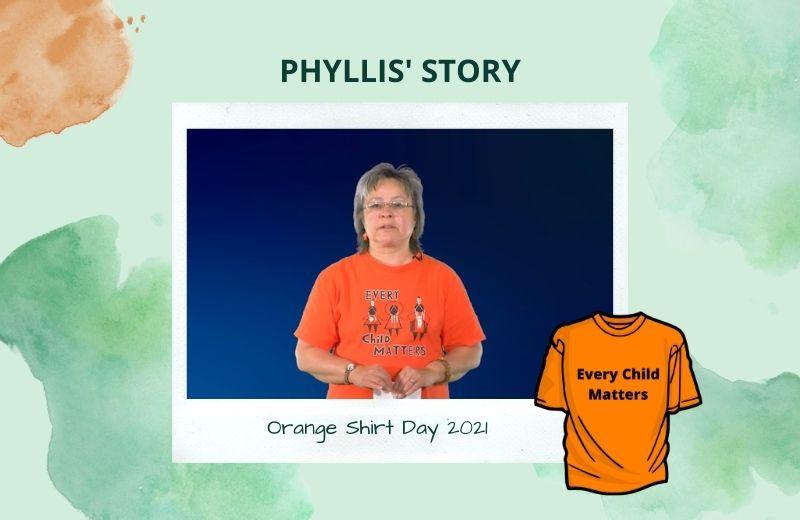 Phyllis (Jack) Webstad was six years old, she was sent to the Mission School near Williams Lake. Her first memory of her first day at the Mission school was that of having her clothes taken away – including a brand new orange shirt given to her by her grandmother.

Orange Shirt Day is a time of collective remembrance during which we honour those who attended Residential Schools as well as their families and communities. It is also a time to demonstrate personal and organizational commitments to reconciliation. This year Thursday, September 30 is Orange Shirt Day across Canada.

To support Northern Health’s awareness and understanding of the significance of Orange Shirt Day, the Indigenous Health team has been sharing information and resources each week throughout September.

This week, we are discussing Phyllis (Jack) Webstad’s experience as a young First Nations girl and the origins of Orange Shirt Day.

What is Orange Shirt Day?

Orange Shirt Day was created out of Phyllis’ story. In 1973, when Phyllis (Jack) Webstad was six years old, she was sent to the Mission School near Williams Lake, BC. Her first memory of her first day at the Mission School was that of having her own clothes taken away – including a brand new orange shirt given to her by her grandmother.

In 2013, Phyllis attended the St. Joseph Mission (SJM) Residential School (1891-1981) Commemoration Project and Reunion events that took place in Williams Lake. At this event, Phyllis shared her story with those in attendance – and Orange Shirt Day was born. The September 30th date was chosen because it was the time of year in which children were taken from their homes and families to residential schools, and the date now provides an opportunity to set the stage for anti-racism and anti-bullying policies for the current school year.

This year, Orange Shirt Day is especially significant. In May 2021, we learned of the tragic discovery of the remains of 215 children buried at the former Kamloops Indian Residential School which was built on the traditional territory of the Tk’emlúps te Secwépemc First Nation. Following this discovery, similar findings emerged from other former residential school sites across Canada including Marieval Indian Residential School in Saskatchewan, where 751 unmarked graves were discovered. The Truth and Reconciliation Commission (TRC) wrote in its Final Report an estimated 4,100 unmarked graves are located at more than 130 former schools across the country2.

National Day for Truth and Reconciliation

September 30th is also the National Day for Truth and Reconciliation. This new statutory holiday was created in response to Call 80 within the TRC’s 94 Calls to Action which recommended the federal government establish a statutory holiday to commemorate a National Day for Truth and Reconciliation to honour survivors, their families, and communities3.

Establishing a National Day for Truth and Reconciliation is an important step toward reconciliation. Reconciliation is defined by the TRC as: “…establishing and maintaining a mutually respectful relationship between Aboriginal and non-Aboriginal peoples in [Canada]. In order for this to happen, there has to be awareness of the past, and acknowledgement of the harm that has been inflicted, atonement for the causes, and action to change behaviour4.” September 30th provides an opportunity for us all to recognize our shared colonial history, to commemorate the children who were lost and survivors, and to reflect on the ongoing legacy of residential schools.

Support is available for anyone affected by the residential school experience.

[3] Truth and Reconciliation Commission of Canada. (2015). Calls to Action.