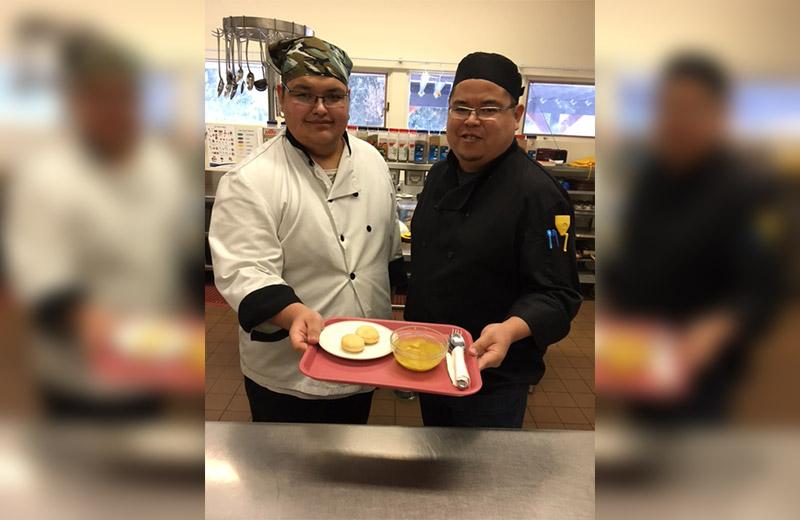 As a member of the Aboriginal Health team at Northern Health, it's really important to me to support culturally safe health care environments. When health care settings are inclusive of Indigenous cultures and traditions, they become more culturally safe for Indigenous people. That is why I was excited to learn how Northern Health staff are making traditional First Nations foods available to patients and residents! In Hazelton, cooks Anita Lattie and Armin Wesley are excited to make traditional First Nations foods available to residents and patients at Wrinch Memorial Hospital. Both Armin and Anita are Gitxsan; Anita is from Gitanmaax and Armin is from Sik-E-Dakh.

"When patients and residents see foods they are familiar with, they enjoy it more," said Anita about the response to the menu additions.

"I have been waiting for this," said a resident about the Hugwiljum fish soup and bannock he was eating for lunch.

The process of adding new foods to the Northern Health menu repertoire involves putting the recipe in a consistent format, testing it with ten people, and then submitting it for approval and further testing. Support services coordinator Deana Hawkins explained to me that once the recipes are approved, they are added to the core menu across Northern Health so other sites can also serve them.

In the Northwest, Mills Memorial Hospital, Terraceview Lodge, and Kitimat General Hospital now offer the Hugwiljum fish soup and bannock. Anita has just finished testing a salmon patty recipe to send for approval this week. "All the staff in the Wrinch Memorial kitchen are Aboriginal and it makes us feel good about our jobs to be able to do this," said Armin. According to BC Stats, in Hazelton, 56.5% of the urban population is Aboriginal.

In Prince Rupert, dietitian Arlene Carlson works with Elders at the Gitmaxmak'ay Nisga'a Society and Friendship House to organize traditional feasts twice a year for residents of Acropolis Manor, the local long term care facility. The feasts include locally prepared, seasonal foods such as fish chowder, moose soup, and kelp on roe. Local First Nations cultural entertainment is a highlight of the feasts. "These feasts are really popular with First Nations and non-First Nations residents alike," said Arlene. This work has helped create a policy within our organization of bringing in food for social functions and cultural events. Other policies are in place to support families to bring in food for their loved ones in long term care.

On Haida Gwaii, traditional foods are offered in both hospitals. In the south, the Haida Gwaii Hospital and Health Centre - Xaayda Gwaay Ngaaysdll Naay serves local fish regularly on the menu and the Meals on Wheels program brings traditional food to Elders in the hospital on a weekly basis. In Masset, Northern Haida Gwaii Hospital and Health Centre residents are offered a special occasion meal once per month. Meals feature local and traditional ingredients such as fish, clams, deer, and locally grown vegetables. On Haida Gwaii, Shelly Crack and Tessie Harris are part of a national movement to incorporate sustainable food into the health care system; including more traditional foods.

Cultural safety is a priority for Northern Health. In July 2015, all BC Health Authority CEOs signed a declaration demonstrating their commitment to advancing cultural humility and cultural safety with their organizations. The goal of cultural safety is for all people to feel respected and safe when they interact with the health system. Culturally safe health services are free of racism and discrimination. People are supported to draw strengths from their identity, culture, and community. One of the features of a culturally safe health system is ensuring physical environments reflect local Indigenous communities and cultures.

Victoria works in Northern Health's Aboriginal health program as the lead for engagement and integration. She is an adopted member of the Nisga’a nation and was given the name “Nox Aama Goot”…