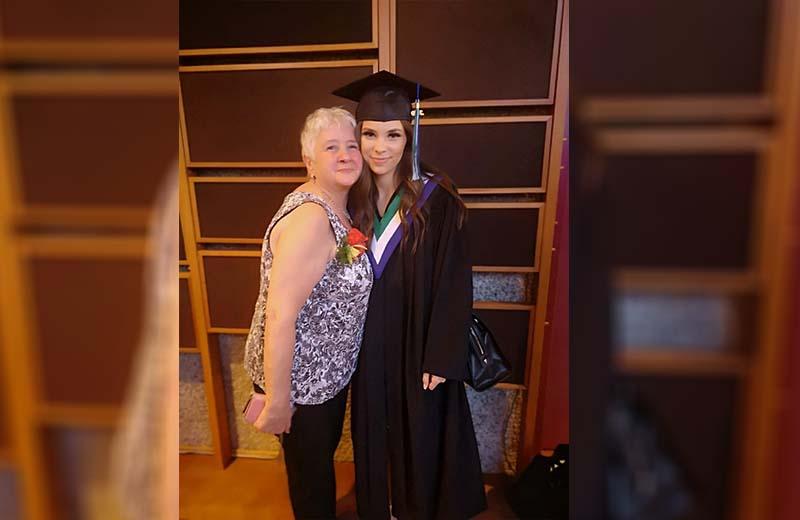 Adella Eliuk, a cook at Prince Rupert Regional Hospital, is readying for retirement after a lifetime of working in our hospital and long-term care kitchens in Northern BC!

Adella started working for the Prince Rupert Hospital in 1967, when she was 16 years old. She worked after school every day and learned how to cook from the ladies who worked in the kitchen at that time.  Adella has said that those ladies taught her a lot and made her work hard. When the new hospital opened, she helped with the transitioning of the patients to the new hospital, and she was there when Queen Elizabeth II opened it. She worked at the new hospital until 1973, when her second child was born, pausing for a time, as there was no maternity leave in those days.

She returned to working for the Prince Rupert Hospital when Acropolis Manor opened. Adella loved cooking for the seniors who lived in the Manor, and treated each one like they were her family.  Adella helped plan the menu for the seniors’ events and always had special treats for them. She and her children remember how the Manor staff were an extended family for them as they helped the seniors in the dining area. Adella worked in the Manor until the kitchen was closed and then transitioned to the main hospital kitchen.

Adella is famous for her Halloween menu at the hospital. She plans it months in advance and truly enjoys conjuring up the menu and display. She decorates and makes the kitchen a festive area for the staff and visitors to enjoy.

Adella has also been heavily involved in the Health Employees Union (HEU). She has held almost every position in the Union and has been a great resource for new and old members.

Please join us in wishing Adella Eliuk a very happy and much deserved retirement! Congratulations Adella!

Congratulations Adella, it was always a pleasure working with you both at Acropolis Manor when it opened and the the move for both of us to the hospital.
39 great years of working with you not to mention having gone to the same schools from elementary through to graduation . Oh the memories I have of our school years!
You are a loyal, dedicated, kind employee who will be missed.
Wishing you the best in this next chapter of your life❤️🎉🎉🎉

Congratulations on a more than deserved retirement. Your kindness, generosity never went un noticed by your co workers. You will be missed!